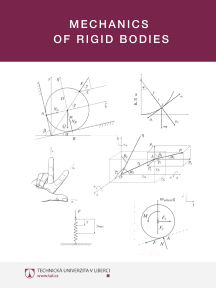 The presented text represents a necessary background for undergraduate students of one semester course dedicated to mechanics of rigid bodies. The course is based on classical deterministic Newtonian mechanics in which the space and time coordinates are completely independent. It is assumed that the rigid, i.e. non-deformable, bodies have masses that are independent of their speeds, that bodies move with velocities that are negligible with respect to the speed of light, and furthermore that we can accept the notion of an inertial system – that is the system which is in rest or which moves with constant velocity with respect to the ‘fixed stars’. Also, non-deterministic traps of quantum mechanics are avoided. The course, divided into three parts, is subsequently devoted to • Statics – analysis of forces acting on bodies – time variable is not considered. • Kinematics – displacements, velocities, accelerations – no forces are considered. • Dynamics – analysis of motions of bodies in time and space. For readers' convenience the Matlab programs are collected in the folder https://dspace.tul.cz/handle/15240/150781